Our cinnamon sugar waffles are crunchy on the outside and soft on the inside. The cinnamon sugar crust keeps your waffles from getting too soggy. Quick and tasty!
Jump to Recipe

I am excited to share this cinnamon sugar waffle recipe with you today. The classic snickerdoodle cookie is the inspiration behind the recipe. If you don't know what a snickerdoodle cookie is it is a sugar cookie that is dusted with a mixture of sugar and cinnamon and then baked. Our waffles use the same sugar cinnamon mixture, but the mixture is sprinkled on the waffles after they are cooked, while the waffles are still piping hot. The mixture then melts into the surface of the waffle and forms a delicious sugar and cinnamon crust.

This recipe does not require an electric mixer, but it does help to use one to thoroughly beat the wet ingredients. This step is important to help the waffles to fluff up. You can also do this by hand with a wire whisk.

I highly recommend that you use buttermilk because it will help your waffles to rise better. If you do not have buttermilk on hand, Lauren from Tastes Better from Scratch has a handy guide for making your own buttermilk using regular milk.

Step 1. In a small bowl, combine granulated sugar and cinnamon. Set aside.

Step 2. In a medium mixing bowl, sift dry ingredients together.

Step 3. In a separate large bowl combine the wet ingredients.

Step 5. Pour the wet ingredients into the dry and stir until nearly smooth. Do not overstir.

Step 6. Mixture should be thick but still easily spreadable. A few remaining lumps are okay.

Store any leftovers in an airtight container or food storage bag. Store as follows:

They can be reheated in the microwave, toaster, or oven.

I hope you love these waffles as much as I did. If you've tried the recipe or have any questions, please let me know in the comments! 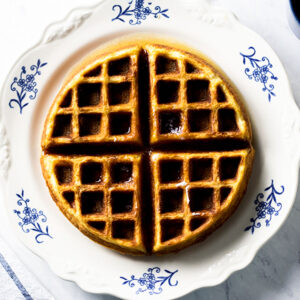 Heavenly Home Cooking
Our cinnamon sugar waffles are crunchy on the outside and soft on the inside. The cinnamon sugar crust keeps your waffles from getting too soggy. Quick and tasty!
5 from 3 votes
Print Recipe
Prep Time 5 mins
Cook Time 24 mins
Total Time 29 mins
Course Breakfast
Cuisine American
Servings 6 waffles
Calories 243 kcal

Hi, I'm Sandra! I believe that you can make a hearty and satisfying breakfast even if you're short on time. Here I share my best recipes which will hopefully help you start your day with ease, nourishment and joy.

We use cookies on our website to give you the most relevant experience by remembering your preferences and repeat visits. By clicking “Accept”, you consent to the use of ALL the cookies.
Do not sell my personal information.
Cookie settingsACCEPT
Manage consent

This website uses cookies to improve your experience while you navigate through the website. Out of these cookies, the cookies that are categorized as necessary are stored on your browser as they are essential for the working of basic functionalities of the website. We also use third-party cookies that help us analyze and understand how you use this website. These cookies will be stored in your browser only with your consent. You also have the option to opt-out of these cookies. But opting out of some of these cookies may have an effect on your browsing experience.
Necessary Always Enabled
Necessary cookies are absolutely essential for the website to function properly. This category only includes cookies that ensures basic functionalities and security features of the website. These cookies do not store any personal information.
Non Necessary
Any cookies that may not be particularly necessary for the website to function and is used specifically to collect user personal data via analytics, ads, other embedded contents are termed as non-necessary cookies. It is mandatory to procure user consent prior to running these cookies on your website.
Save & Accept
Powered by