0shares
Jump to Recipe
Use the toppings of your choice, homemade sauce and make a surefire crispy pizza in your skillet. No more saggy and soggy pizza slices! I love pizza.  I'm probably not alone in this, right?  When I was growing up my dad used to refer to me as the pizza kid.  Ask me what I wanted to eat and I would always answer, "Pizza!" with all of the enthusiasm of a child on the last day of school.  I could eat it morning, noon and night.  Needless to say, when I became an adult I've tried my hand at making homemade pizza on numerous occasions.  Some attempts were winners and some were losers.  It was a definite hit or miss.  I never quite figured out how to get the crust just right every time.  It was either overly crisp or saggy and soggy.  Usually saggy and soggy.  No one complained.  They were polite.  But I knew my pizza-making skills could use some work. That was until I saw a recipe that called for making the pizza in a skillet.  Just a regular old (or new) skillet.  Now maybe I've been living in the pizza-making dark ages, but that thought never even occurred to me.  I'd heard of making pizza in a cast iron skillet, but I don't own a cast iron skillet and - call me silly - I thought cast iron was required.  No indeed!  Any skillet will do, although it does have to be oven safe. I'm telling you, that skillet is a pizza-making miracle-worker.  I've made it this way about 3-4 times now.  Perfect.  Every.  Time.  Granted, this won't make a huge pizza that's big enough to feed a large crowd.  Skillets are only so big.  However, it will make one small-medium pizza, suitable for 2-3 people.  Now, there's nothing stopping you from doubling or even tripling this recipe and making several small-medium pizzas using various toppings.  It would be great for a party.  And you don't have to worry about getting bogged down with lengthy cooking times because it only spends about 3 minutes on the stove and 7 minutes in the oven.  It may not be something you want to do in the summer because making a batch of several pizzas adds up to a lot of oven time.  I know I don't really want to fire my oven up to 500 degrees in the middle of summer, especially living in Arizona.  If it was for anything other than pizza, it just wouldn't happen.  Yet, fall is right around the corner and with it come fall gatherings.  I've heard it's a busy time for take-out pizza places.  If you're going to have a party that involves pizza, hopefully this has inspired to try making it yourself?

If that doesn't inspire you, then maybe this video will. 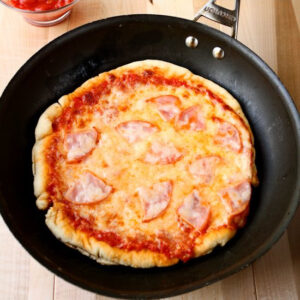 Total Servings 2 people
Tried this recipe?Let us know how it was! Hi, my name is Sandra, and I'm so glad you're here! Feel free to take a look around and if you see something you like, please let me know. I love to cook beautiful and delicious food and am happy to have the opportunity to share that with you. Read more about me…